“Thursday July 5th we sailed out from Sørvaer at 9 am heading for far away fishing grounds. First stop of the trip was at “Innerbåen” and it didn’t take long to catch several seith and a couple of smaller halibuts. A few hours later we were far at sea and made our first drift at the southern part of “Storskaltarn”. I was using a scary Jerry jig at a depth of 35 meters. After a few distinct bites on the jig I decided to fish the jig a couple of meters higher in the water. It was attacked immediately and I was tied up to a fish I couldn’t move. Instead it slowly started to accelerate.

Rolling waves and the size of the fish made it hard to gain any line, but after 30 minutes of fight we saw the shape of a huge fish below the boat. As it broke the surface it looked even bigger and everyone on board was surprised by the size of it. 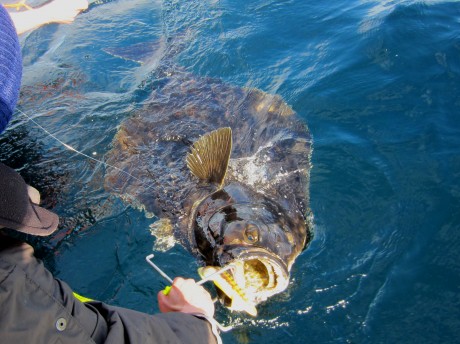 After unhooking and measuring the halibut we were ready to release it. It measured 180 cm in length and we were all fascinated as we watched this giant swim back into the deep. It was a memory to last a lifetime”.

If we’re not mistaking it won’t be the last time Magnus goes halibut fishing in Norway. Congratulations on a great catch on the Magic Minnow, Scary Jerry jig.