The sea trout fishing in Denmark and the southern Sweden has been excellent for the last couple of weeks. Two weeks ago expert fly tier and sportsfishing journalist Andreas Aggerlund was fishing in Denmark with Peter Kirkby from Kinetic. Peter was fishing from the shore while Andreas was flyfishing and covering a little deeper water from his pontoon boat. The latter proved to be the best tactic as Andreas hooked a huge trout in prime condition. After an intense fight the fish was landed and it was indeed huge: 5.0 kilos and 70 cm were the measures – the biggest trout Andreas has ever caught on a flyrod. The fish was caught using a Rio Fast intermediate Sea Trout Shootinghead and a tubefly imitating a small sandeel. This clear shootinghead is a favorite for most of Andreas´ flyfishing from shore or pontoon boat and it was stripped in at a fast pace (almost as fast as possible) when the trout took the fly.

Next day Peter and Andreas were out again. This day Andreas decided to try spinfishing and it proved to be a good choice as he caught another impressive trout. This one was 4.7 kilos and took a Magic Minnow Sømmet inline lure.

The following weekend Andreas decided to go to Sweden and was rewarded with another big fish. Once again Magic Minnow Sømmet did the job. This time the weight of the trout was 3.1 kilo.

Same weekend as Andreas was going from Denmark to Sweden, Swedish Daniel Nilsson from Kinetic did just the opposite. Together with some of the Danish Kinetic guys he was boatfishing in Denmark. Out of several trouts caught on Sømmet that day Daniel had the biggest at approximately 4 kilos. This was a large colored fish that was released right after the capture and it was also a personal best for Daniel.

During the weekend that just passed Peter Kirkby from Kinetic was out again. For the last many trips he had been quite successful spinflyfishing with a clear/intermediate 20g Bombette / casting float and a Unique Flies RPO Yellow Tail. This combination worked excellent on a lot of smaller trout’s and some nicer ones up to 63 cm. 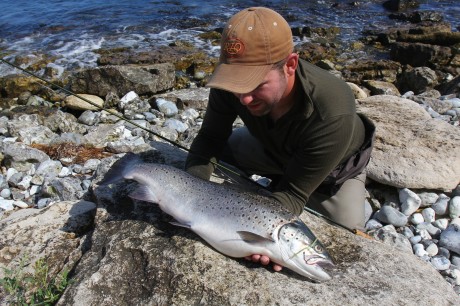 This weekend the rig worked again and so did Sømmet. A nice fish estimated at 3-4 kilos was loston the Yellowtail fly and soon after a 55 cm fish was caught and released using the same fly. Later on Peter changed spot and tried fishing in some big waves as the wind picked up.  Using Sømmet he was immediately rewarded with a beautiful 2.4 kilo / 59 cm fish and later on two other trout’s around 1-1.5 kg were also tempted by the inline lure.