From Norway and Sweden we have some great reports on big pikes caught on Westin Platypus lures.

Erik “Pikewallis” Walmann from Norway is one of the most well-known pike fishing profiles in Norway and together with a handful of friends he is running Scandinavia’s most popular predator fishing blog –­ http://pikewallis.blogspot.no/ . According to Erik, he and the Westin Platypus lure has become very good friends lately. November 10th Erik was using the 19 cm natural Pike colored Platupus while fishing in the Mjøsa lake. He was fishing on top of a plateau at a depth of 2-3 meters when he caught a 112 cm long and 10.2 kg heavy pike. 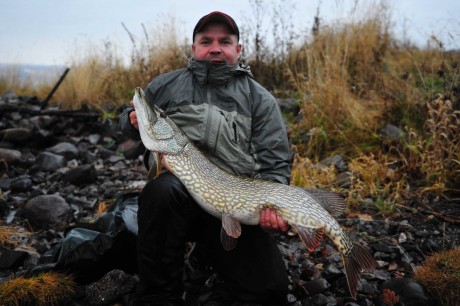 Not only does Swedish lure maker Kristian “Stampe” Stam – www.stampelures.se – make some fantastic hand carved and custom painted lures. He is also a very skilled pike angler who isn’t afraid to experiment with other lures than his own. Early summer he bought a “concealed fish” colored 19 cm Platypys and liked the action. Since then the lure has been used for a lot of spin fishing and a lot of pikes including two fish over 10 kg. The first of these was caught a couple of weeks ago and measured 113 cm / 11.3 kg. It was caught while fishing in open water in an area with a depth of 12 meters and it attacked almost immediately after the lure hit the water. A posing and release YouTube video of the fish can be seen at: 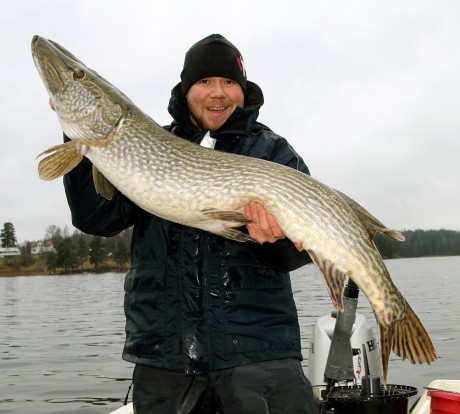 Stampes latest catch on the same Platypus lure is even more impressive. This time he was fishing in a 5-6 meter deep area when a pike took the lure close to the boat. The fight was the toughest battle against a pike Stampe has ever fought. Luckily the odds turned in his favor and the pike weighed in at impressive 13.3 kg and 127 cm. A YouTube video of this fish can be seen at:

Of course Kristian “Stampe” Stam also catches a lot of big pikes on his own hand made Stampe Lures. Another video worth taking a closer look at is a video with a lot of different pikes during this spring and first part of the summer: