At the small Danish river Storaaen the season ends on October 15th. There’s a catch limit to the number of salmon every year and once the limit has been caught only sea trout fishing and catch and release on salmon is allowed. 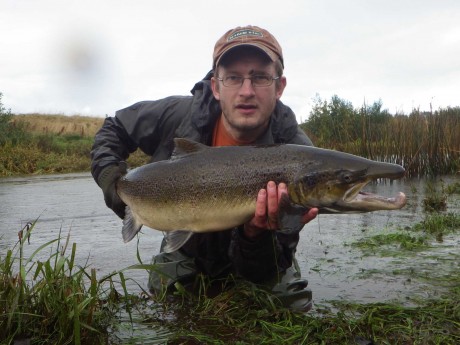 Thursday last week Danish salmon and trout expert Thomas Mosgaard was at the river to do some trout and salmon fishing. At first the fishing was slow, but around noon Thomas decided to try out a Delfin Stikling lure. Within 15 minutes he caught and released the first salmon measuring 64 cm and then a larger male measuring 87 cm. The 87 cm fish delivered a fantastic fight and Thomas was sprayed in mud, when he managed to land it. 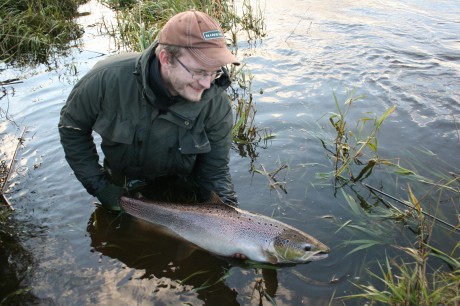 Three weeks ago Thomas damaged his arm and after catching a smaller sea trout, he wasn’t able to do more spinfishing. Instead he baited up with worms on a barbless circle hook and used this method for the rest of the day. After moving to another part of the river he ended his session by catching a couple of impressive salmon measuring 97 and 100 cm and a small salmon he didn’t meassure.

All fishes this day were caught using a Kinetic rod, Viva reel and Rio Powerflex Braid .