Every year Thomas Eldor Petersen from Kinetic brings his family to River Namsen and the tributary Sandøla for a week of vacation and salmon fishing. At an age of six years, Thomas’ son Christian is already hooked on salmon fishing and showing remarkable skills. This year they were accompanied by Thomas’ good friend Flemming Schollert and his son Oliver. Both of them were hoping to catch their first salmon. 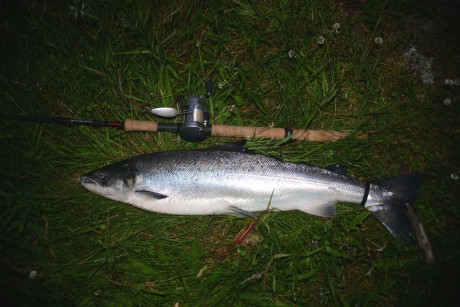 The water level and the general conditions were perfect and all four of them managed to catch salmon. Flemming had a 6.4 kilo fish from Sandøla as his first salmon ever, and his son Oliver was rewarded a beautiful three kilo salmon. Six years old Christian had a fight of a lifetime when he caught a 5.6 kilo salmon as his biggest fish and Thomas was rewarded a 6.8 kilo fish as his biggest. 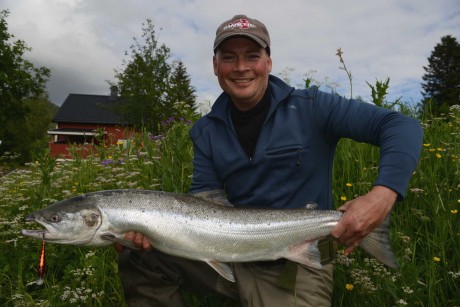 The trip was a great opportunity to test some new Edge and Kinetic Goodspeed salmon rods. All of them performed even better than Thomas could have hoped for. The two deadliest lures of the trip was one of the new genuine silver plated Delfin lures and a Westin Thoro wobbler in black/copper.

The season on River Namsen and its tributaries has been good so far – but perhaps not as good as local experts would have hoped for, especially when taking the perfect conditions into consideration. The latest years the average size of salmon in Namsen has been dropping and several really small salmon are caught while the bigger ones are becoming rare. 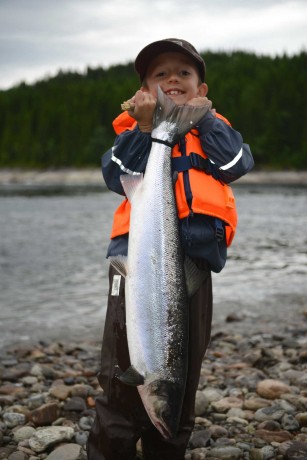 Having said this, River Namsen can still surprise and produce huge fish. Earlier this year a really huge salmon was hooked on three different occasions at the “Jørum” beat. Last time the salmon was lost just as one of the local guides was ready to assist in beaching it. He estimates the salmon at 25 kilos – more than 50 pounds!