Lars Nielsen from Denmark is crazy about tropical popper fishing. Last week he returned from a trip organized in cooperation with Scandinavian tour operator GetAway Tours to their camp on Tuna Coast in Panama.  He returned with a lot of feedback and catches on the new Edge 3776 Popping rods. During the trip Lars was accompanied by Danish and Swedish anglers looking for popper action. A majority of the anglers had chosen to buy popper rods from the Edge 3776 series. In total they were fishing for eight days and had lots of action on poppers and stickbaits. Some of the action included some unbelievable “tuna frenzy” with packs of yellowfin tunas hunting large shoals of sardines. No fishing experience is as exiting and visually intense as fishing from a fast boat and casting a surface lure into an inferno of feeding tunas. On several occasions the tunas made huge leaps out of the water to attack the lure mixing with the panicking baitfish. Everyone on this trip got their share of hard fights against 25-40 kilo yellowfins – and all of it on light popper equipment.

During this kind of fishing – as well as when using larger poppers for cubera snappers – the tackle gets tested to the extreme and the difference between good and really good tackle is shown right away. Some rods break or do not live up to the expectations. The superior strength and qualities of the Edge rods was a popular topic every evening when the tired anglers meet up to share their stories.

Tour leader Lars Nielsen is a hard core popper angler travelling to most tropical parts of the world in search of huge fish. He’s also a tackle fanatic and has some high recommendations on the Edge 3776 Popping rods as a standard choice for fishing poppers up to 180 grams:

“I have used a large number of some of the world’s best rods for poppers, including several rods in the 1000 dollar prize range. An Edge 3776 Popping rod shows properties that will fully match those rods,” says Lars. 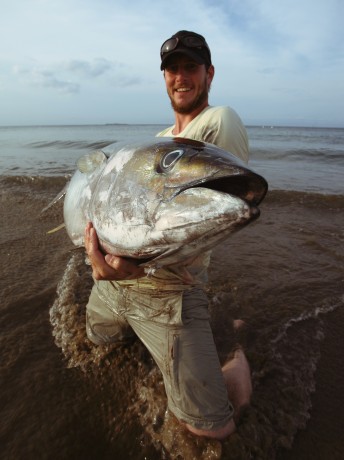 Patrik Karlsson from the Swedish shop EL-GE Sportsfiske in Skövde is holding one of the biggest tunas caught during his resent Panama trip. This yellowfin was estimated between 50 and 60 kilos.

Lars Nielsen is showing off with a beautiful yellowfin tuna. Most tunas caught during the trip were in the 25-40 kilo range and it’s hard to imagine a better way to test the Edge 3776 Popping rods. 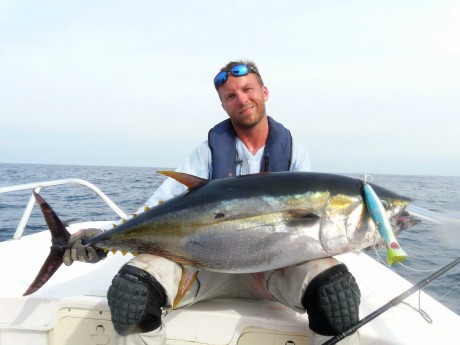