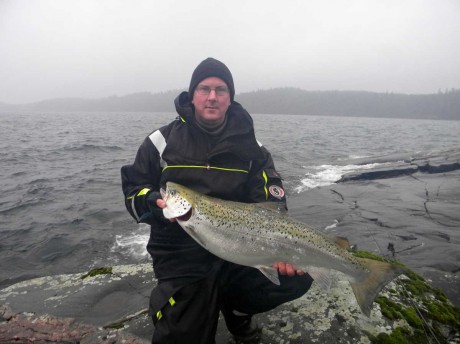 Last week Daniel Nilsson – one of our Swedish Kinetic / Fairpoint Outdoors sales representatives had combined a sales meeting with some fishing in the large Swedish lake, Vättern. ­Costumers Carl Schander and Martin Danielsson from the shop “Böjda Spön” were going to test some of the Magic Minnow lures on the land locked salmon found in the large lake. The first day they were fishing from boat casting with Magic Minnow D360° in-line lures near the rocky shore. A couple of smaller salmon were caught and two others, including a really large one, were lost. All of this during just one and a half hour of fishing.

The second day big waves made boat fishing to risky and the guys went casting from the rocks. Daniel was using a D360° while Martin picked a 20g Magic Minnow Flax in “Burned Jewelry” color. Martin was first to hook up, and as while he was leaning into a big fish, Daniel was able to both hook and land one of the lakes beautiful char. There was no doubt that Martins fish was something extraordinary, and luckily Carl was ready to assist in landing the monster. As expected it was a beautiful salmon – all chrome with dark spots. By carefully weighing the salmon and the landing net, the weight of the salmon could be calculated to 8.1 kilo – truly a remarkable catch! 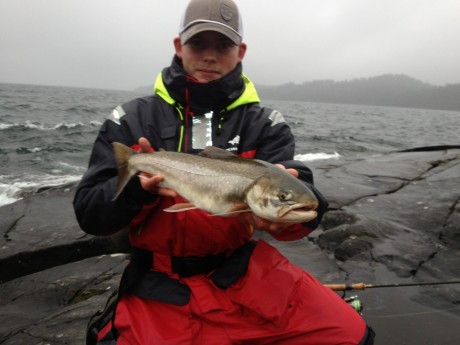 The large salmon was gently released back into the lake after a few photos, and before the day was over another but smaller char a small salmon were also caught on the Magic Minnow lures.