To the professional fishing guide Ronny Andén the season peaked last week, when one of his clients caught a huge pike measuring 124 cm and weighing 12.7kg. Like several other big pikes this year, it was caught on a Westin Platypus.

The two brothers Robert and Ronny Andén are – without the shadow of a doubt – the most experienced fishing guides in all of Scandinavia.  In total they have been guiding fulltime for over 50 years with pike, perch and zander as their preferred target spicies. Most of the fishing takes place in freshwater or in the large brackish water estuaries near Stockholm.

Since the end of May the fishing has been “red hot” and costumers fishing with the two guides have been catching both large numbers and larges sizes of pike.  There has been days with four fish over eight kilos and the fishing peaked last week as one of Ronny’s customers caught the 124 cm / 12.7 kg monster on a 57g Platypus. The very same day Ronny himself caught a 9.6 kilo fish. 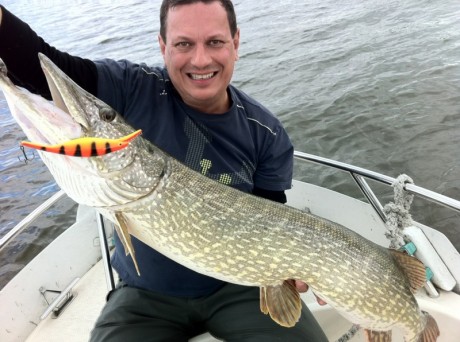 During the last weeks the best colors have been Concealed Fish, Red Tiger, Goldwing and Tiger.