Last weekend was the first weekend without ice and one of Swedens top fishing guides, Kristian Keskitalo from www.bigcatch.se, vent out with his friends Göran Roberts and Stefan Källström. They were trolling with six rods and the lures included a pair of 190mm Westin Platypus lures in colors Drag queen and Zombie. First part of the day was slow, but they had a few fish and lost what seemed to be a really big one.

In the afternoon they went back to the area where the big one was lost, and instantly a nice pike attacked the Drag Queen-colored Platypus. This fish started the action and in total 10 pikes were caught – all of them took one of the two Westin Platypus lures. Four of the pikes were over 100 cm long and the two biggest took the scale down to 10.3 kg and 12.2 kg. 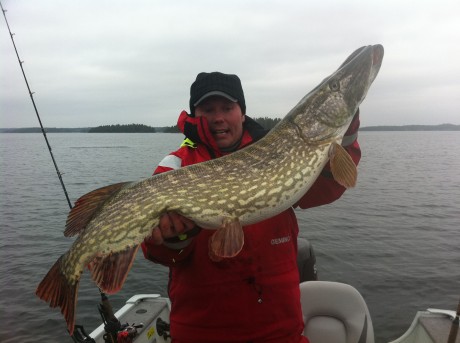 The guys made a great YouTube video showing a lot of the action and the big pikes. Find it at: