The huge migrating cods from the Barents Sea – so called skrei – have arrived near the Norwegian coastline. At Nordic Sea Anglings camp on Sørøya, the first guests arrived and spend the first week of March facing though conditions and very unpredictable weather. The biggest cod caught during the first week was 28 kg, but unfortunately the weather didn’t allow the guests to spend much time on the best spots. 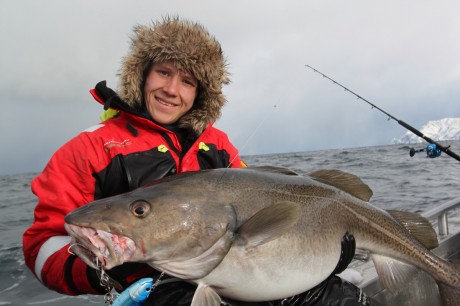 Another remarkable catch during the first week was a 168 cm halibut caught while targeting the large Skrei. It’s actually the biggest halibut fish caught at the camp during the Skrei season. 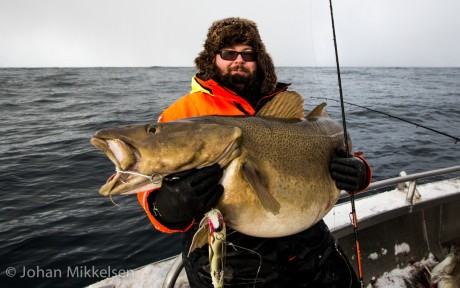 During the second week of fishing, the weather has been better but still a bit unpredictable. Never the less the guests are able to fish and right now the monsters are being caught. A Sørøya super-size cod is above 30 kilo and the first one of the season was caught the 8th of March. It took the scale to 31 kilo. The day after the fishing was even better and in an area found 2-3 nautical miles from the camp 15 cods over twenty kilos were caught. The biggest was a super-size cod weighing 33 kilo. An impressive fish caught on the 730 gr Big Bob seafishing jig designed for this targeting this size of fish. The happy angler was Stefan Smith from Sweden. The day after another super-sizer was caught: 30.6 kilos!

As we talked to the guides at the camp. Erik Axner – one of the experienced NSA guides – had just caught a cod weighing 27 kg. As many other monsters this cod was also caught on a 730g Big Bob jig. Unless the weather makes fishing impossible, we will have more reports coming in soon.