At Nordic Sea Anglings (NSA’s) camps in Norway this seasons bookings is now over, but actually the fishing seems to be as good as it gets. Last week NSA owner Jimmy Andersson was visiting Havøysund. Whenhe arrived at the camp the first evening he couldn’t stand the temptation of testing a sample of the new Magic Minnow Crazy Daizy jig at a spot five minutes boat ride away from the camp. His first choice was the new rainbow color and it didn’t take more than 20 seconds before this jig delivered the goods. It wasn’t the biggest halibut in his career, but still a great start. 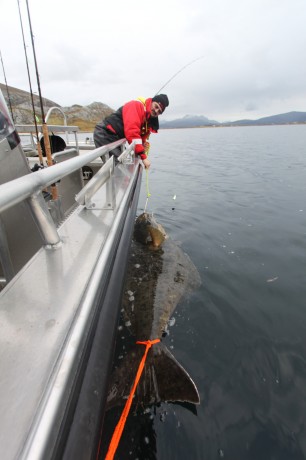 Jimmy was testing four different colors of the Crazy Daisy jig and for the following days all of them were catching halibuts. The weeks fishing peaked on the last day as Jimmy was fishing with camp manager Ulf Hugsén. This day the two of them caught eight halibuts in total. The biggest measured 143 cm and was caught on a combination of the head from a blue glamour colored Crazy Daisy with a rainbow colored body.

According to Jimmy the new Crazy Daisy jigs are really hot: “They have proved to be real halibut killers and I’m expecting a lot of big halibuts to be caught on Crazy Daisy’s as they become available next year”.

At the NSA camp at Nappstraumen the halibut fishing is also peaking. Right now camp manager Fredrik Schmiterlöw is fishing with his father and a friend and the fishing is extremely good. When we talked to them yesterday they were fishing with deadbait on Magic Minnow Halibut Anti Twist Rigs. The fishing was absolutely crazy with halibuts measuring 115, 118, 124, 127, 150, 170 and 175 cm being caught and released.  The fishing took place only a few minutes boat ride from the camp and all three anglers had a new personal best halibut during the day. During the last week other big halibuts were caught by the three anglers and Fredrik had plenty of opportunity to test an Edge speed Jigging rod with a TiCA Talisman fixedspool reel that worked perfect for fish measuring 143, 150 and 170 cm. 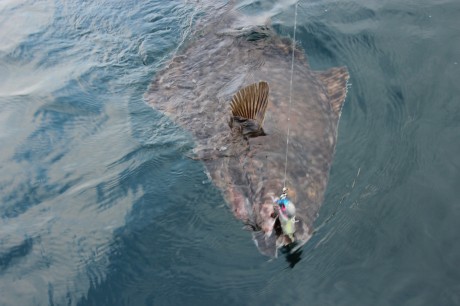 In many ways sea anglers do not realize the full potential of the Norwegian sea fishing during the last part of the season. Despite what most sea anglers expect October is an excellent time of year for halibut fishing and hopefully bookings at this time of year will be more popular in the future, as people realize just how good the fishing can be.